Last Sunday Oct 7, Run Run Run performed at the Greek Theatre supporting iconic Manchester band, New Order. There was a moment in the middle of our set when I really felt like there was no way to could describe it. Like we had all misused words such as “amazing” or “incredible” up til now. Standing at centerstage, with Run Run Run firing on all cylinders, the crowd cheering along, the fresh griffith park air mixing with the scent of fog machines from the uber cool lighting they gave us, the power of the sound system, the majesty of the Greek with its towering trees uplit for all of us to gaze upon, and the fact that we were playing our songs whilst opening for a band that has changed so many lives, including mine -- it was fucking BEYOND AMAZING! The shows went so well, and the members of the New Order family treated us great. We had a nice hang with them over the weekend. Special thanks to all that came to the shows to root us on, and helped us to make this all happen behind the scenes.

Looking forward to shows on the East coast playing with MUMIY TROLL from OCT 25- NOV 2, Tranz K headlining the West Hollywood Carnaval on OCT 31, my solo kickstarter appearance in Houston on OCT 12, and then finally getting home in November to relax and work on new songs for the upcoming RUN RUN RUN record. What a great 2012 it has been!!! 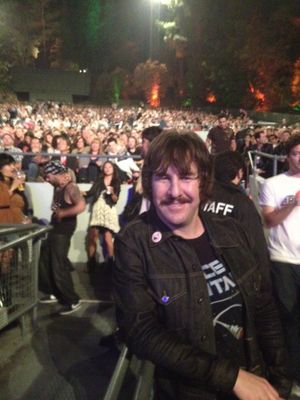